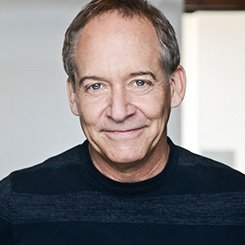 Born and raised in Toronto, ON.

FOR SOULPEPPER: A Christmas Carol, Of Human Bondage (Toronto & NY); Spoon River (Toronto & NY) Incident at Vichy (Dora Award, Best Ensemble); The Odd Couple, Of Human Bondage (Dora Award, Best Ensemble); The Dybbuk, Great Expectations, You Can’t Take It With You, The Crucible, A Midsummer Night’s Dream, The Time of Your Life, Our Town, A Christmas Carol, The Way of the World, Ring Round the Moon.

John Jarvis has appeared in a number of Soulpepper productions in the past, including The Way of the World, Ring Around the Moon, and The Time of Your Life (returning in 2011). John reprises his roles as Jacob Marley and the three ghosts for this year's production of A Christmas Carol.

A Christmas Carol has a long history with Soulpepper. What's it like coming back for the fifth time to do this production?

It's an emotionally bottomless pit of a story, this tale of redemption. I could come to it every year for the rest of my life to find my own moments of worry, concern, and fear in the play. To be a spirit and to guide Scrooge through his transformation is always a remarkable and emotional journey. I'm a nostalgic person by nature, so to get to play the Ghost of Christmas Past, and recognize the things in your own past that worry you is always going to be an emotional ride.

Dickens' original novel A Christmas Carol has never been out of print. What do you think it is about the story that makes it so timeless?

JJ
I always recognize that grown men are weeping up until the day of the 24th of December, but by the 26th it's not so easy to crack that hard heart. But it's like everybody needs a cleansing of the dilemmas of the choices we make in our lives, whether in our childhood or adulthood, our relationship with our parents or friends, the actions that we've made in our lives. We're always trying to make the best choices, but there are always ones we regret or ones that were mistakes. There are times when we look back on the golden moments of our childhood and feel that pang of loss. So I think people come to the show and feel that - as if they could go back and see their little childhood self - the show has a deep impact and touches that point. And all the armour, all the thick skin that we develop over the years gets melted away when you are placed in Scrooge's shoes. We're not all as extreme as he is, of course, but there are elements of all of us in this character, in the story.

The show opens with you speaking to the audience, very clearly an actor putting on makeup. How does that set the tone for the rest of the show?

I think it's a stepping stone, showing the audience that it is a piece of theatre, a piece of stagecraft, that we're creating magic out of nothing. I think it helps to bridge the gap to making that suspension of disbelief. We've actually changed the beginning this year though. We're trying to simplify things a bit, so the makeup isn't going to come on like it used to, but it's still the act of "Welcome to the theatre, welcome to this world we're going to inhabit where the unexpected and surprising will fill you." But it seems to set the tone where we can slip right into the ghost story and people are on the edge of their seats.

Why do you think that having one actor play all of the spirit characters is an effective way of telling the story?

I'm sure originally it worked both artistically and economically, but I think the idea is that there are elements of Marley in all the ghosts, that it's still him all the time - he's been allowed to come down and set Scrooge on the right track. It's helpful for Scrooge to see that this ghost is a real person he knows and not just some imagined face. It's somebody that has looked into his eyes and said "the ghosts are coming and they're coming for you." And when he sees Marley in each of these stories it helps him to know that this is tailored specifically for his journey.

The 2011 Season is just around the corner. Is there any role or play that you're looking forward to the most?

Edgar Webb in Our Town is one of my favourites. He gets to sit very closely to the world of Emily and her dilemma. The warmth, the confused pleasure of the man as he tries to navigate having a teenage daughter and having a son in law, having to tell his version of that story is such a delight. The one brilliant scene with the son in law is one of the great, almost perfectly-written duets in dramatic comic theatre. It's always been a pleasure to revisit and figure out new ways of doing it.