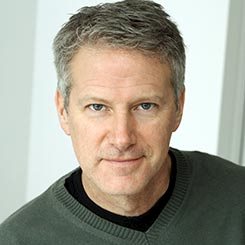 Born in Clinton, ON and raised in Brantford and Goderich, ON.

FOR SOUPEPPER: Incident at Vichy, Twelve Angry Men, The Odd Couple, Jitters, Parfumerie, Time of Your Life, King Lear, Ring Round the Moon, As You Like It, Mary Stuart, Glengarry Glen Ross, The Chairs, A Christmas Carol, The Importance of Being Ernest.

OTHER: Nominated for three and winner of two Dora Awards. A graduate of the National Theatre School.

A regular on the Soulpepper stage, Kevin Bundy has appeared in many productions, including Glengarry Glen Ross, Jitters, A Christmas Carol, King Lear, and Fool for Love. Kevin is a veteran of the Stratford and Shaw festivals, and a graduate of the National Theatre School. He took time from rehearsing to talk about The Time of Your Life and returning to the character of Tom.

Kevin Bundy
It's a little bit like dusting off a favourite old book. I really liked playing this character a lot - it fit like a glove for me. Some roles are harder to get into than others, but this was a really good fit; I understood this guy right away. So it's so great to come back and reacquaint myself with him - it's sort of like shaking hands with an old friend. What excites me about playing Tom is his beautiful warmth and innocence. Saroyan is always talking about the evils of the world; about some people who seem to want to make the world a worse place. Tom simply wants to make the world a better place, and that's what I love about him - that heart and that drive. Coming back to the play itself - I love the writing, I love what it has to say - and being on stage with Joe Ziegler is a real treat.

NK
Most of the original cast has returned for 2011, but a few new actors have joined the ensemble this year. How has it been working with returning actors as opposed to the new artists? Is there a shorthand that develops?

KB
Definitely. Since Joe and I have worked on other shows in the past, we sort of have a shorthand anyway. It's pretty great to go back into the scenes and rediscover the ways we performed certain moments. It's also been wonderful to get the chance to work with the Soulpepper Academy. I've seen the work they've done with the Clown Cabaret, with Oh What a Lovely War, Death of a Salesman, and A Midsummer Night's Dream - and seeing this makes me realize just what a talented bunch of people they are. I know that because they've been here for almost two years that they're warmed up, they're in shape - so to speak - even though they're dropped into this rehearsal process they hit the ground running.

NK
In some ways, The Time of Your Life is a play about dreams - about longing for a better life. What do you think is your character's dream?

KB
Well like I mentioned, he wants to make the world a better place. He gets asked by Joe's character what he wants to be in his life. If you could do anything, what would you do? And Tom says that he would want to do what Joe is doing - which is sit around drinking champagne and never worry about money. Which is kind of what everyone wants to do, really! Not laze around and be a loaf, but not have to be strained the worries of life. I suppose that ties into the whole notion of the American Dream - to have a home, to raise a family - which is not just the American dream. He just wants to be able to help somebody, like Joe is doing for Tom, and what Tom wants to do for Kitty. So I think ultimately his dream is just to be able to help other people, to make their lives better. Because he was down and out and was helped by Joe - so he doesn't just want his own home or that kind of material dream, he wants to help somebody else.

NK
You're back at Soulpepper now until the end of the season - right through to Parfumerie. Which role are you looking forward to the most?

KB
I'm looking forward to playing Stefan in Parfumerie because he's such a cad! He's so much fun to play, with Maev Beaty as my supposed girlfriend and having my butt kicked by Oliver Dennis. He just doesn't care about other people and only does what he wants to do!