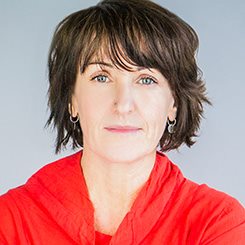 Born in Swift Current, SK and raised in Ingersoll, ON.

OTHER THEATRE: Orlando, Middletown; Noise, If We Were Birds, carried away on the crest of a wave, adaptation of Coriolanus
(York University); Lungs (Murmuration Theatre Company).

OTHER: Her radio adaptations of Virginia Woolf’s To the Lighthouse and Emily Carr’s Klee Wyck were commissioned by the Shaw Festival and broadcast nationally on CBC in 2001 and 2002; MFA (Directing) from York University.