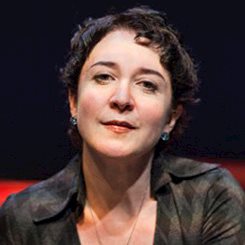 Karen Hines is a two-time finalist for the Governor General’s Literary Award for Drama for her Pochsy Plays and her Drama: Pilot Episode, and a Dora Award-winning performer and director. Her highly theatrical stage plays and darkly comic solo shows featuring the character ‘Pochsy,’ have been presented across Canada, America and in Germany. As a director and dramaturge, her collaborations include all of adult horror clowns Mump & Smoot’s many shows from One Yellow Rabbit’s Little Secret Theatre 25 years ago to such venues as Canadian Stage, Yale Repertory Theatre and La Jolla Playhouse. She also directed and dramaturged Alberta Theatre Projects’ premiere of Linda Griffiths’ Age of Arousal, which has gone on to a dozen productions internationally.