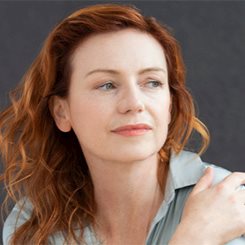 FOR SOULPEPPER: Waiting for the Parade, A Month in the Country.

OTHER THEATRE: Seventeen seasons at the Shaw Festival, most recently Sex, Stage Kiss and Dancing at Lughnasa. She has worked at theatres across Canada including the Stratford Festival, RMTC, Canadian Stage, Crow's Theatre, Buddies in Bad Times and the NAC.

FILM & TELEVISION: The Good Witch, Anne with an E (recurring).

OTHER. Dora Award for Doll's House (DVxt). Upcoming: The Playboy of the Western World, Prince Caspian (Shaw Festival). She is a National Theatre School graduate, where she now works as an instructor and coach.