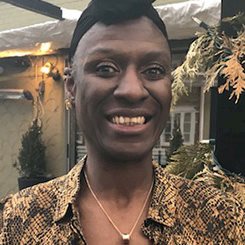 Natasha C. Bacchus is from Toronto, Ontario. Is both an award-winning athlete and actor, combining her athleticism with her physicality in theatre. She is recipient of numerous medals in track and field including Gold and Silver from the World Games for the Deaf, Bulgaria (1993) and Gold from Denmark (1997), Silver from the Pan Am Games for the Deaf, Venezuela (2007) and Master Track Breaking Records in Track & Field (2014-2015). Performance highlights include her debut as Shaw TV Talk Show Host, BC (2014), Verse Festival ASL Storyteller, BC (2014) and ASL Poet, Women of Colour, Sisters in Motion, Quebec (2017/2018). Natasha recently studied at Jane Bryan Films Casting workshop, New York City (2018) and is currently studying documentary filmmaking at Liaison of Independent Filmmakers of Toronto (LIFT) and George Brown College. Natasha was selected winner of Canada Top 100 Black Women to Watch by the Canada International Black Women Event (CIBWE) 2019.