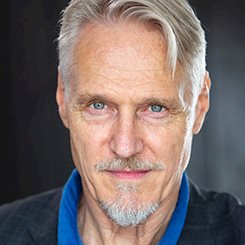 Robert (bob) Hiltermann, was born almost 65 years ago in Wiesbaden, Germany, the 10th of 11 children. Spinal meningitis left him deaf at the age of 4. His family moved to Canada when he was 5 years old, which made communication even more difficult. It wasn’t until he was 18 years old that he left home and went to Gallaudet University for the Deaf where he learned American Sign Language, which changed his life. Being raised in a family of classical musicians, inspired Bob’s love for music, eventually gravitating toward rock music and performance. He became well known for his pioneering work in the award-winning theater, MUSIGN, which toured internationally.

Currently, he is a drummer for the all-deaf rock band "Beethoven's Nightmare" which has toured across USA, Canada and Europe. Bob also plays electronic keyboards and synthesizers and he has his own music recording studio. As an actor, he has starred in documentary films, TV, soaps, stage productions and feature films. He also produced and starred in the crazy American Sign Language educational series "Shut Up and Sign", which inspired Bob to pursue filmmaking. As a filmmaker, Bob completed his first short movie, “This is Ed!!” which he wrote, directed and produced. The award-winning film has been shown throughout film festivals around the world. Currently, Bob is working on his next film, working toward his goal to produce, write, and direct a feature film.