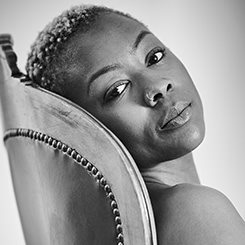 Is a Toronto based artist in her 12th year of independent practice as a choreographer, performer, vocalist, and teacher.

FOR SOULPEPPER: Choreographer: for colored girls...

OTHER: Gave birth to her son Manoah on August 11, 2009. In 2017 she was featured on CBC’s HERstory in Black honoring 150 Black Canadian women making a significant contribution in Canada. In 2013 she won the Frankie award at the Montreal Fringe Festival for Most Outstanding Choreography.